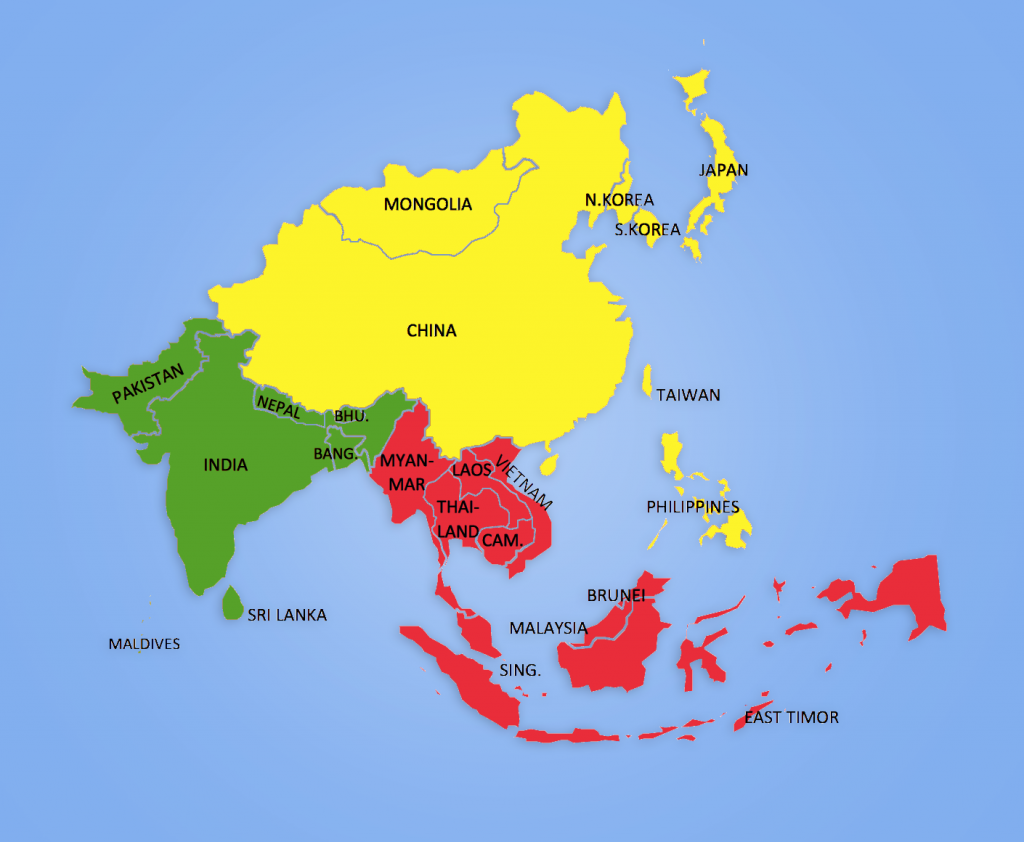 Fundraising in Asia is surviving the economic slowdown. It is refreshing to note that it is thriving in some places, although not without inherent challenges. Here are six fundraising insights gathered from across Asia for the past year.

International NGOs (INGOs) have turned their focus on Asia as part of their global growth strategy. The bigger INGOs like Greenpeace, UNICEF. UNHCR, WWF are already well established in Thailand, India, Hong Kong and are increasing their investments in fundraising in Philippines, Indonesia, Malaysia and Korea. Many other INGOs have also started their fundraising operations in Asian countries. For example SOS Children’s Village, Save the Children and Nature Conservancy have launched their local fundraising in Indonesia in the recent years. Other major INGOs are also preparing the ground to launch their local fundraising efforts in 2016. Cross-border appeals are also on the rise, e.g. Thailand responding to the Syrian refugee crisis, Indonesian donors supporting the Nepal earthquake appeal, among others.

Currently, the key income driver for many NGOs with the ability to make sizeable fundraising investment is face-to-face fundraising. Over 50,000 regular donors are recruited each year in markets like Thailand. Hong Kong NGOs have recorded a 20% income growth of individual giving program with monthly donation amounts averaging around US$19. Rights-based organisations, ‘non-glamorous’ and niche causes like leprosy have seen success in recruiting one-off donors with average gift size of US$54 in India. In the Philippines average giving is around US$25 per one-off gift.

Some of the challenges faced in implementing this methodology are:

The mass marketing challenges mentioned above have also given the impetus for NGOs to seriously consider high-value gifts through major donor development. Those with a current base of mass-market donors are strategically evaluating their database to identify potential major donor leads while those without a base of local donors are leveraging their network of local contacts and connections to explore possibilities.

Capital campaigns by Universities, healthcare and arts organizations are leading in this area, although NGOs that have embarked on strategically seeking major gifts are seeing substantial benefits. Innovative donor recruitment and recognition methods, like the one initiated by a large museum in the Philippines through ‘tenured’ naming rights, where portions of the museum are named for a given period of time, has seen willing major donors.

Nepal’s first billionaire Binod Chaudhary has been involved in philanthropic activities through his 20-years old Chaudhary foundation. However, after the recent earthquake he together with his two sons have pledged US$2.5 million to restore schools and homes destroyed or damaged by the quake.

Joseph Tsai co-founder of Alibaba Group gave 15 million share options of the Alibaba Group. These options were received and held by the SymAsia Foundation Limited based in Singapore with instruction to set up his private philanthropic trust and distribute to recipient charities. The value of this gift calculated at the time of donation stood at US$1.18 Billion

Family foundations in Hong Kong with its many cross-generational philanthropic projects has benefitted medium to small NGOs. Hence, NGOs like Room to Read and Global Fund for Children have launched fundraising operations in Hong Kong.

Last year Rohan Murty the youngest among India’s top philanthropist donated Rs.35 crore (US$5.6Million) through his Murty Classical Library of India, which aims to make available the great literary works of India from the past two millennia. The cities of Mumbai and Bengaluru had the most number of philanthropists. Education continues to be the top cause for about 50% of the top philanthropists identified in the Hurun India Philanthropy List 2015.

Angel network investing in the commercial world are a small group of private investors who pool their capital to invest in small business ventures. ‘Giving circles’ are the angel networks that support causes. While giving-circles aim to mobilise mid-level donors, the Dasra Giving Circles in India has raised the bar by mobilizing gifts at major donor levels. Eighty-five percent of the capital from each circle is deployed as expansion grants to the NGO further to comprehensive mapping and research of the organisations. In Bhutan, The Kings Challenge, led by the Royal family is developing both social enterprise and venture philanthropy for development initiatives identified for this philanthropic challenge.

In India, an analysis of disclosures made by 1,181 listed companies in compliance with the Corporate Social Responsibility (CSR) norms under the recent Companies Act, highlighted that more than 90% of the 1,181 companies complied with CSR norm. 87% of the eligible listed companies have spent around Rs 6,400 crore (US$ 1 billion) on CSR projects in the last financial year. Almost 55% of that has been channeled to education, skills & livelihoods development, health and sanitation. Most of the companies have projects in industrialised parts of the country, with states of Maharashtra and Gujarat receiving a significant share.

In China, cities of Beijing, Shanghai and Guangzhou (the Eastern and Southern China regions) are seen as places where CSR is the most developed regarding knowledge and performance among companies. The government is the key driver in the promotion of CSR. Compliance with national policy, legislation and regulations is ranked as the top incentive in terms of CSR implementation by Chinese companies. The government is expected to strengthen the enforcement of related legislation, and the media is expected to increase its coverage of CSR activities and performance beyond philanthropy in the coming year.

In Asia, factors such as rising smart phone penetration and more tech-savvy population have helped e-commerce grow strongly and along with it, the digital giving culture has caught on.

China’s exceptional digital infrastructure has provided digital fundraising a major boost. In September last year, Tencent, one of the largest internet companies in the world, launched a RMB99.99 million (over US$15 Million) matching fund to encourage Chinese charities to use its mobile crowdfunding platform. Within 72 hours, over two million donors made online donations totaling RMB 128 Million (US$19.5 Million) exhausting the matching fund. Digital fundraising has become one of the most important sources of funding for many NGOs, especially those recognized by the public and causes with strong emotional appeal.

Singapore launched an integrated giving.sg site in December 2015 and raised S$7.65Million (over US$5 million) in the inaugural month. The portal hopes to link giving of money to giving of time and skills so as to enrich the donors’ personal giving journeys. An online campaign during the Lunar New Year highlighting brothers aged 7 and 11 years giving part of their ‘ang pow’ (festive cash gift) to charities. This campaign resulted in a 70% increase from the previous year during the 20 days of the festive season.

Social entrepreneurship has become a popular vehicle for student-led solutions. An increasing number of corporates and venture philanthropists are backing their efforts. For example, the DBS-NUS Social Venture Challenge Asia 2015, an Asia-wide competition for social enterprises saw 685 entries from 30 countries with 1,565 participants. This Challenge aims to identify and support new social ventures that have the potential to generate positive, scalable and sustainable social impact. The profile of the 255 mentors working with the participants on their projects included social entrepreneurs, investors, civil society practitioners and resource providers. India, Singapore, Taiwan, Indonesia and China topped the entries list for projects focused on industries as varied as the web & mobile solutions, healthcare and sanitation, energy & environment, education, agriculture among others.

Most of the Asian countries have become middle and high-income economies. Even current low-income economy like Bangladesh is on a unique development trajectory fueled through innovative, low-cost development solutions such as microfinance programs, social mobilization campaigns, and an increase of inward remittances being some key reasons. Most Asian countries which were up to the recent past dependent on bilateral, multilateral and international aid agencies for funding their development projects are no longer on the priority list of these institutional donors.

Hence, the need for a thriving local fundraising and philanthropy eco-system becomes urgent. This includes:

While there are the inherent challenges, there are also exceptional opportunities that Asia presents to the rest of the world. These include the emergence of India as a hub for social entrepreneurs as well as the development and delivery of fundraising materials across the globe both leveraging on its talented workforce as well as cost efficiency of the logistics. For example, dispatching direct mails from India to Western Europe and the USA is more cost efficient than their in-country postage. Singapore’s thrust as a smart nation by harnessing Infocomm technologies, networks and data to co-creating solutions with anyone for everyone would re-engineer Singapore from being the best in the world to becoming the best for the world. It is also a thriving port for venture philanthropists and social investors to share, learn and impact globally.

I will be sharing more insights on the future outlook for fundraising in Asia in my next post. For now, I look forward to hearing from you on your current experience with fundraising and resource mobilization and your thoughts for the future.