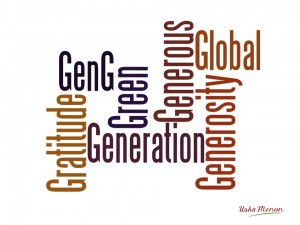 While much is written and discussed about the giving behaviours of the baby boomers, Gen X, Gen Y (or Millennial), I want to focus on Generation G in this post.  Generation Generosity cuts across many age-groups and their generosity embraces more than charity. Here is an account of a recent encounter with a member of Gen G …

While on vacation in India, visiting friends and relatives, my five year old son Akshay received a good amount of cash as gift. So on the last day of our vacation, I asked him what he wanted to do with the money. I was already considering a particular mall I could take him, to help spend it.

The conversation that followed surprised me …

‘Is this a lot of money” he asked.  “Yes for a child that is a pretty big amount” I replied.

“So does that make me rich?” he queried. “Oh yes indeed” I responded.

“OK then let us give it to those who do not have money. Since I am rich, that’s what I want to do” he said.

As we had just a few hours before we travelled out, I took him to the closest charity and explained to him the work being done to help poor children. A receptionist then accepted his donation and provided him with a receipt, a brochure and a ‘thank-you pen’.

Later I asked Akshay how he felt about having helped. His reply made me stop in my tracks…

‘I don’t think I helped any poor child’ he said, ‘all we did was give the money to a woman at the counter for a pen!

Here are 3 teachings that I gathered from my son that day:

1. Gen G have a natural affinity to gratitude

Akshay could do whatever he wanted with ‘his’ money and he chose to help others. Many, who are part of this Asian century, have experiences that are very different from those of their parents. They are very aware of their privileged economic status and the income disparity that they see around them. Despite their access to material comforts and exposure to consumerism, many are very community-minded and are keen to make an impact in the lives of people on the other side of the economic divide.

2. The alignment of values matter more

Generation G does not see generosity as just sharing or giving away material, money and talent. They are genuinely compassionate and concerned. Hence they expect causes to show reciprocal compassion and concern, not just to the beneficiaries of their generosity (be it fellow humans, animals or the planet) but also to every stakeholder of the cause. The core values of a commercial company or a cause needs to be aligned with theirs and they demand that these entities demonstrate it through their daily practice. They are less motivated by brands and identifies more closely with ideals and values.

3. It is about the overall experience

Gen G has a need to feel that they are a part of something and are making a difference. For them that experience is the essence of the cause.

For communicating and engaging with this generation, non-profits leaders and fundraisers will have to understand that: